http://jeffjastro.com
Well, I described what H-alpha (Ha) is in my blog, below (Moon in Ha).  I have since completed processing of one of the other objects I imaged last Monday night, 23 Sep 13, and for this one I also created a "comparison" of the result (with/without Ha).

Here is M33 ... and in this, the Ha regions are clearly visible (Ha is in the red part of the visible spectrum so represented as red/pink areas), so we can see from here hydrogen emissions from 3 million light years away.  Here are areas where there are exploding stars and/or star forming regions.

The "full" version and detailed imaging descriptions can be found, here: http://jeffjastro.com/dso/M33Ha_23Sep13.htm 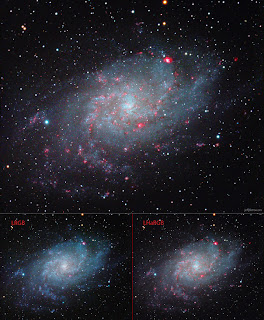 Posted by jeffjAstro at 3:52 PM No comments:

http://jeffjastro.com
Finally a break in the weather on 23 September 2013.  So, setup the equipment and imaged multiple objects (the data from the session I am still processing as there is a lot and multiple targets).  While switching between objects that night around 11PM local time, the moon was rising, so I was changing to the H-alpha (Ha - a wavelength of 656.28nm) filter for the remainder of the night.  This filter allows only Ha band light, and the particular filter I have is extremely narrow at only 3nm.  Ha is generally where hydrogen emissions from nebulae fall, and since it "ignores" any other light, it can be used even on nights with a full moon!  Ok, so for this post, I will show an image of the moon.  What you see here is a stack of three 1/1000s exposures shot through the Ha filter of the QSI 540wsg camera using the TOA-130F scope.

I offer this as I continue processing other data :) 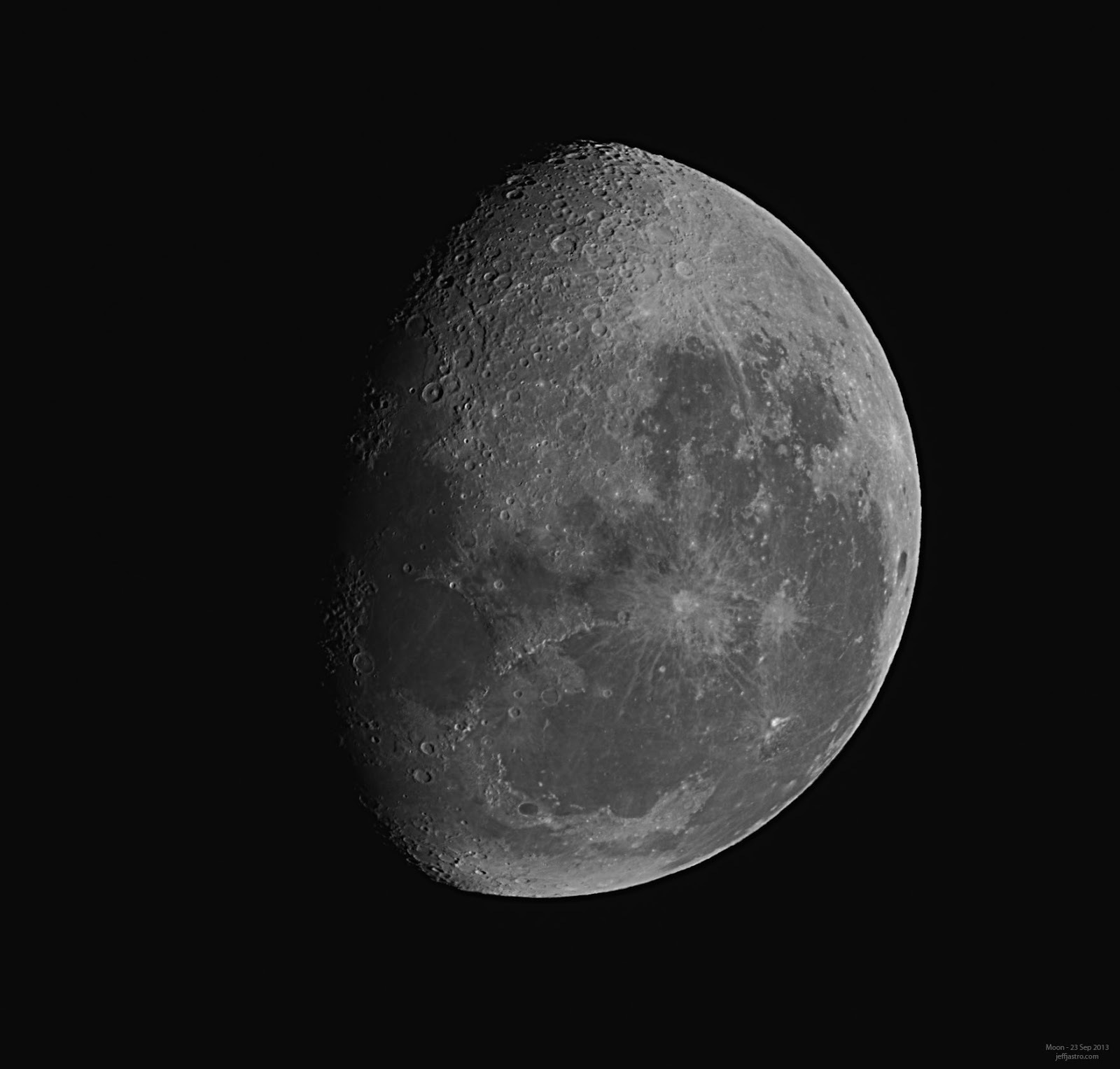 Posted by jeffjAstro at 10:18 PM No comments:

http://jeffjastro.com
As the cloudy/rainy weather continues, there was a single night (4 Sep 13) that I was able to setup, as it looked like the night would be clear.  Well, clouds later rolled in just as I finished focus/alignment of the scope/mount (TOA-130F and EM200).  Just before I took down the equipment and took it back inside, I took a single 3 second image of Vega through the Lum filter of the QSI 540wsg camera.  Later (last night, 20 Sep 13), I used data from my point and shoot camera (Canon S5IS) to add a little color to it, since I had it outside for a little while shooting the moon.  With star spikes and color added just to Vega, here is the result (with clouds visible). 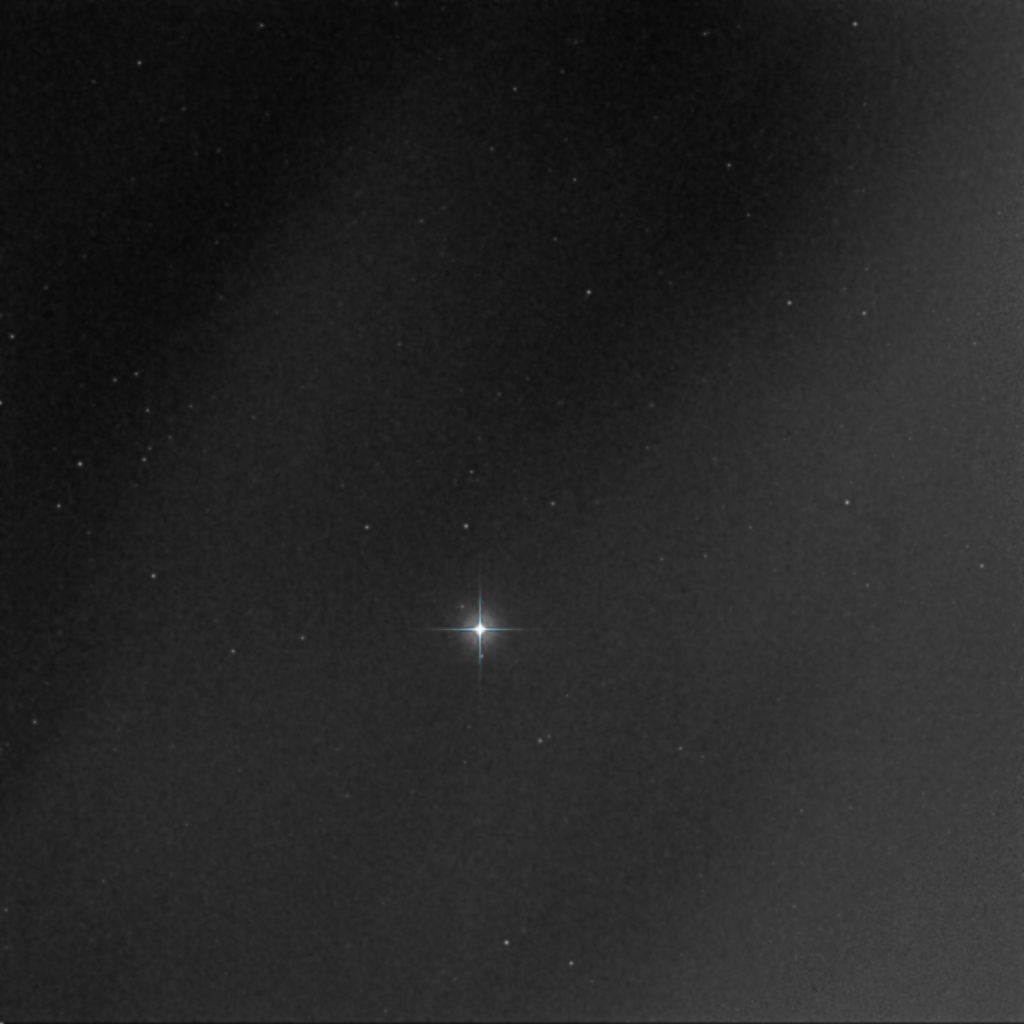 In addition to the above, a little later in the cloudy month of September, I used the Canon S5IS to create my first composite image with this camera.  This was a shot of the moon through clouds, seen, below.  To do this, I took two frames, each at a different exposure, and then combined them to show what the moon looked like that night (20 Sep 13). 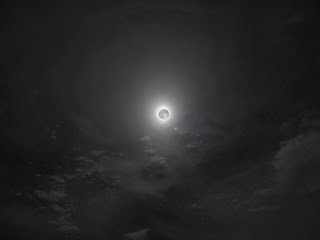 Posted by jeffjAstro at 4:00 PM No comments: