http://jeffjastro.com
Another result from the night of 28 Sep 13...this is the Crescent Nebula.  The 3nm Ha filter is picking up dusty regions that were created by Hydrogen.  The mono-colored result I am including shows just what the Ha filter alone picked up.  The color version includes Red, Green, and Blue filter data.  For the final result, I used the Ha as the Luminance, and also combined the Ha data with the Red filter data for the Red channel, and combined this result with the Green and Blue channel data.  Exposure details (as well as full-size result) for this can be seen here:  http://jeffjastro.com/dso/NGC6888_28Sep13.htm

Here are the two results:

http://jeffjastro.com
Here is a shot from a little later in the week from my previous posts.  I am just now starting to process the data from this night which was 5 days later than the previous targets, and occurring on the night of 28 Sep 13.

For this object, the Helix Nebula (also referred to as the "Eye of God" for obvious reasons :) , I also went to 20 minute frames using the Astrodon 3nm Ha filter for the luminance data, and also mixing the Ha result with the Red channel for the complete RGB portion.  The result I have, below, is oriented exactly as the camera caught it (normally, this is my preference).  The Hubble presentation has this rotated 180 degrees, which makes the outer filaments (lower right) appear as some kind of eyebrows/lashes.  Update: I have since re-oriented my final result at my main site and will include it as an additional image, here.

Further details and larger can be found here:  http://jeffjastro.com/dso/NGC7293_28Sep13.htm 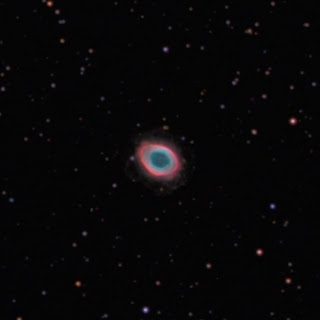 On the same night, I took a quick shot of comet ISON, near Mars.  It turns out that during that time, the second-largest largest known near-Earth object (NEO), asteroid Eros, was racing by as well.  In the 3 frames I took, you could see them both moving.

My final result here is of the best from from the three (so is noisy)...a single 4min exposure and in mono (as this was through a single filter, Lum).  I have annotated the result. 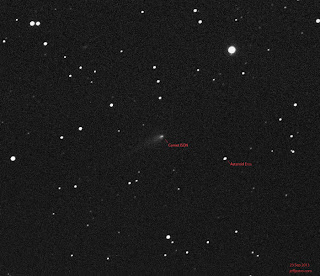 Posted by jeffjAstro at 7:27 PM No comments:

http://jeffjastro.com
Another one finished.  From the same imaging session on 23 Sep 13 - this dim object was actually my main target, and quite difficult processing, I must say (as it was clearly moving).  It is pretty distant for getting a comet at nearly 3 times the distance to our sun.  I did manage to pick up a not often imaged magnitude 13 galaxy just above the comet as a bonus, however (and described at the link, below).
Comet C/2012 F6 (Lemmon), 23 Sep 13
http://jeffjastro.com/solarsystem/C2012F6Lemmon_23Sep13.htm 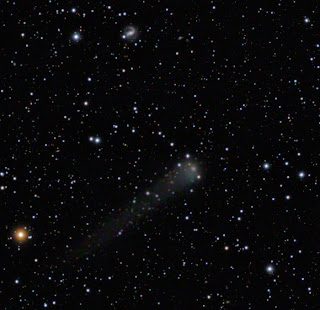 Posted by jeffjAstro at 4:34 PM No comments: